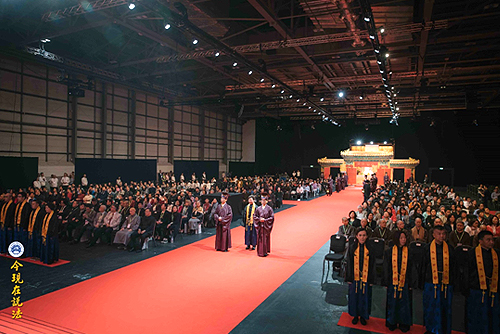 A service that full of Chinese characteristics and with people from countries around the world gathered together was held in ExCeL London in UK between June 9th and 11th , 2017. It wasThe London 2017 Thrice-Yearning Memorial Service to Protect the World and End Disasters and Ancestral Remembrance Ceremony with the Theme of Displaying Filial Sentiments, Respecting Teachers and Acknowledging and Repaying the Kindness of Others, which was jointly organized by UK Chinese Business Association, University of Wales Trinity Saint David, UK Huadzan Amitabha College Ltd, Cooperate Body of Hwa Dzan Pure Land Teachings Propagation Foundation and Hong Kong Buddhist Education Foundation Ltd.

The first Ancestral Remembrance Ceremony held in London last year displayed the cultural fusion of East and West and a picture of the global family, which touched countless people throughout the world, met high approbation and received an overwhelming response. Therefore, this year the ceremony expanded and invited close to a thousand guests from all over the world to come for the ceremony. In conjunction with this event, an 2D and 3D exhibition titled “The Wisdom of Sinology–Contribution of Sinology to Mankind” was also held on site, which attracted a lot of people to visit, experience and learn. Venerable Master Chin Kung attended the ceremony and proposed, “I hope ancestral remembrance ceremony of this kind could be held in London every year to promote East-West cultural exchange and inter-religious solidarity.” 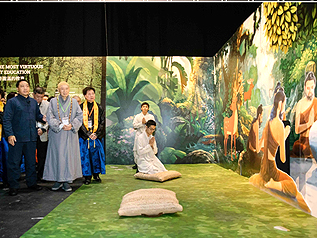 Thrice-Yearning Memorial Service to Protect the World and End Disasters

At 10 a.m on June 10th, Venerable Master Chin Kung delivered a speech titled “Introduction of the Four Books (Si Shu)-A Masterwork of Chinese Traditional Culture” to demonstrate the importance of educating people to perform like saints and sages in the perspectives from individual cultivation to world peace. At 11 a.m, the first day of Ancestral Remembrance Ceremony officially began at the sound of bells and drums. Mr. Zhang Jinlong, president of UK Chinese Business Association, was the principal officer of the ceremony with other oversea Chinese leaders as escorts. There were close to one thousand attendees, including people from all over the world and from all walks of life, to join this event to commemorate all of the world’s ancestors and promote the spirit of filial piety.

Memorial tablets of all of the world’s ancestors were put in the Ancestral Remembrance Ceremony venue for worship. All ancestors on the tablets were offered with main courses and all  kinds of delicious foods. People chosen for praise, ritual, music and witness, and escorts and principal officer will took their places in sequence with traditional garments.

Procedures of the Ancestral Remembrance Ceremony involved opening the door, firing a salute, greeting the Gods, offering up a sacrifice, burning incense by principal officer, making tributes for three times, saying a prayer, eating the offerings and drinking to accept the blessing from ancestors, taking away the offerings, seeing off the Gods, burning the oration, closing the door and etc. During the ceremony, the orchestra played graceful and solemn Xianhe, Ninghe, Anhe and Jinghe Songs to make the ceremony more peaceful and serious. The prayer in the ceremony showed the spirit of gratitude for the source of benefit, the pity for the decline of outstanding traditional culture and high praise for UK’s emphasis on the culture of ancient saints and sages. It also appealed for mutual learning and cultural fusion of East-West, and mutual promotion of traditional culture to achieve inter-country harmony.

At 10 a.m on June 11th, Venerable Master Chin Kung delivered a speech titled “Carry on the Past Heritage and Open up to the Future” to commemorate the virtues and contributions of ancestors and to repay their kindness by inheriting the traditions of ancient sages and saints. Then the second day of Ancestral Remembrance Ceremony began at 11 a.m, with President Medwin Hughes from University of Wales Trinity Saint David as the principle officer and other main leaders from the university, domestic celebrated people and leaders of UK Chinese business as escorts.

Speech: Beauty of Traditional Culture and Harmony of Multiple Religions

The president, professors and students from UK Academy of Sinology started to deliver speeches at 1p.m on June 10th about the significance of ancestral remembrance ceremony, traditional moral principles, cultural basis for the Belt and Road and contemporary significance of carrying on the past heritage and open up to the future, respectively.

The president and professors from University of Wales Trinity Saint David and representatives of Islam and Buddhism began to deliver speeches at 1 p.m on June 11th about the significance of ancestral remembrance ceremony to dialogues among multiple cultures, about understanding ancestors and following examples of ancient sages, and about the communication and harmony among religions in terms of Islam, Christianity and Buddhism.

To Display Traditional Cultures and Share This Treasure Trove with Everyone

During this 3-day ceremony, the organizer hosted an exhibition titled “The Wisdom of Sinology–Contribution of Sinology to Mankind.” With large display boards, this exhibition helped people to understand Buddhist education, provided evidence of emphasis on ancestral remembrance ceremony in ancient traditions throughout the world, and also helped people to recognize the importance of Complete Library in the Four Branches of Literature (Si Ku Quan Shu) and the mission of UK Academy of Sinology to inherit and pass on sinology and to complete the continuance of Compilation of Books and Writings on the Important Governing Principles (Qun Shu Zhi Yao).

The exhibition not only had the circumstance reappeared of expounding the texts of Buddhism and teaching under a Bodhi tree by Buddha Shakyamuni, a great inter-cultural society educator more than two thousand years ago, but also had a classroom of Chinese traditional private school (Si Shu). Fu Zi (teachers) were invited to teach Chinese calligraphy in this classroom so both Chinese and foreign guests could try Chinese calligraphy on site and experience the charm of Chinese traditional culture.

The world has become a global village or a global family due to the convenience of modern transportation and advanced communication. Everyone on earth is a part of this same family and is a closely-related life community going through thick and thin together. Thus, everyone should love and protect the earth and be kind to each other. Through the Ancestral Remembrance Ceremony, let us pay tribute to all of the world’s ancestors together and promote the spirit of filial piety and great love, which is the display of global solidarity and harmony. The Book of Filial Piety (“Xiao Jing”) says, “At their utmost, filial piety and fraternity would make our ancestors feel touched; people from everywhere would also know it and be touched and take it as an example.” Thrice-Yearning Memorial Service and Ancestral Remembrance Ceremony fully express our remembrance with gratitude of filial piety of all of the world’s ancestors and our fraternity to global people. This sincerity and love certainly could promote global peace and harmony.