Home About Us Profile Of Venerable Master Chin Kung 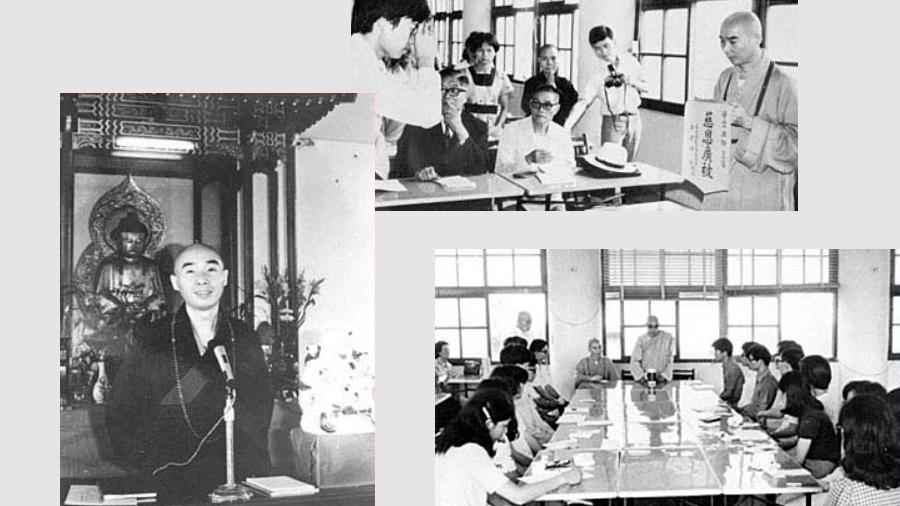 whose formal name is Hsu Yae Hong, was born in Lujiang County, Anhui Province, China, in 1927. He spent thirteen years studying the classics, history, philosophy, and Buddhism under the guidance of Professor Fang Dongmei, a great philosopher of his time; Zhangjia Living Buddha, an eminent monk of the Tibetan Buddhist tradition; and Mr. Li Bing-nan, a lay practitioner and master of Buddhism. In addition to being well versed in the sutras and commentaries of the various Buddhist schools, Master Chin Kung has also read extensively the teachings of Confucianism, Taoism, Islam, and other religions. However, he has spent most of his time and effort in studying Pure Land Buddhism and it is here that he has attained his greatest achievements. 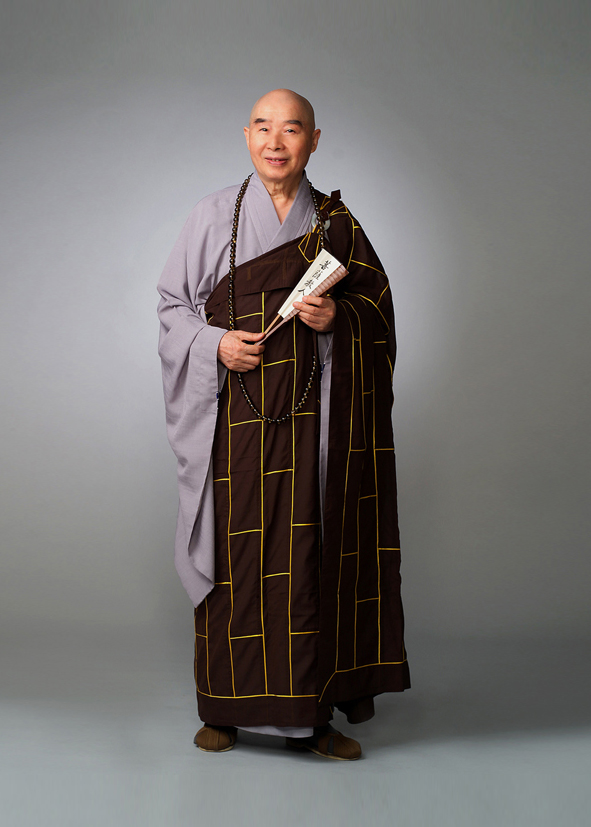 In 1959, Master Chin Kung became a monk at Linji Temple of Yuanshan, Taipei, and was given the Dharma name Jue Chin and an alternative name Chin Kung. Since receiving full ordination more than forty years ago, he has been propagating the Buddha’s teachings in Taiwan and throughout the world.

He has given lectures on the Avatamsaka Sutra, the Surangama Sutra, the Complete Enlight-enment Sutra, and the five sutras of the Pure Land school, just to name a few. He advocates that we return to the original, correct meaning of Buddhism: an education by the Buddha. Although almost eighty, he still continues [teaching]. He has been traveling around the world, especially in the past few years, to share his ideas on how to resolve unrest and conflicts, and restoring the teachings of the ancient sages [to their rightful place in education.] Upon returning from his travels, despite being fa-tigued, he promptly resumes teaching [in the recording studio]. The Master’s spirit of compassionate teaching is truly admirable.

In 1998, Master Chin Kung started lecturing again on the Avatamsaka Sutra. To date, he still tirelessly maintains a schedule of lecturing four hours per day and has recorded more than 2,500 hours of lectures on this important sutra.

Master Chin Kung has held the following positions [in Taiwan]: instructor at the Tripitaka Institute at Shipu Temple in 1960; member of the Propagating Teachings Committee and the Records Committee of the Buddhist Association of the Republic of China in 1961; head instructor at the Bud-dhist Seminar for University Students at the Buddhist Association of the Republic of China in 1962; research fellow of Buddhism at the Chinese Academia Institute, and professor and editor of the As-sociation of Buddhist Sutras, Commentaries, and Translations of Taiwan in 1973; professor of the Philosophy Department at the Chinese Culture University, and professor of the Spiritual Living Course for East Asian Catholics [at Fu Jen Catholic University] in 1975; president of the Chinese Buddhist College in 1977; and president of the Chinese Pure Land Practice Research Institute in 1979.

He also founded the Hwa Dzan Dharma Giving Association, the Hwa Dzan Buddhist Audio-Visual Library, the Corporate Body of the Buddha Educational Foundation, the Hwadzan Pure Land Learning Center, and many other Pure Land organizations all over the world.

Master Chin Kung’s several decades of teachings can be summed up by the following principles for practice: “true sincerity, purity of mind, equality, proper understanding, compassion, seeing through, letting go, attaining freedom, according with proper conditions, and being mindful of Amitabha Buddha.”

He pioneered the use of the Internet and satellite television in propagating Buddha’s teachings and the sages’ ideas twenty-four hours daily and over long distances. This broad and long-term view demonstrates his true wisdom. He works to resolve conflict and to bring about world peace. Fur-thermore, he has been promoting multicultural concepts of religious cooperation and racial harmony. These actions reveal the infinite compassion in his pure and nondiscriminatory mind.

Since 1977, Master Chin Kung has been accepting invitations to lecture abroad. On establishing organizations for propagating the Buddha’s teachings, the Master advocates doing it in the form of learning centers or learning colleges to serve as practice centers for the public, where Dharma mate-rials can be circulated and where future Dharma lecturers can be trained. Today, there are more than one hundred such organizations around the world. Such organizations set up to propagate the proper Buddha’s teachings are formed by Chinese [practitioners] and acknowledge Master Chin Kung as their teacher or advisor. In 1995, he instructed the Singapore Buddhist Lodge and the Amitabha Buddhist Society of Singapore to jointly sponsor a training program for Dharma lecturers. In 2001, he established the Pure Land Learning College Association in Toowoomba, Australia.

Besides lecturing and teaching, Master Chin Kung also sponsors the printing of sutras and books and the production of tapes and DVDs on moral education and on the teachings of sages for free worldwide distribution. He also authorizes the public to reproduce his works. In recent years, he sponsored the printing of several thousand sets of the Buddhist Canon and purchased Siku Huiyao. The recipients have been libraries, universities, and Buddhist organizations throughout the world.

Master Chin Kung has taken on the mission of “Learning to be a teacher; acting as a role model.” Therefore, wherever he goes, he devotes himself to advancing his ideals of racial unity, so-cial harmony, and right moral conduct. After he immigrated to the United States in 1985, he was awarded Honorary Citizenship of both the city of Dallas and the state of Texas. In 2000, he immi-grated to Australia. Two years later, in 2002, he was awarded an honorary doctorate and appointed an honorary professor by Griffith University, Australia. That same year, the Mayor of Toowoomba made him an Honorary Citizen.

Master Chin Kung has sought neither fame nor fortune throughout his entire life. To him, all these worldly honors are impermanent, so he is not attached to them at all. That he has been conferred these honors indicates that many people share his view of the extremely urgent need for pro-moting multicultural education and restoring morality. Because of this affirmation and recognition, the Master has formed true friendships with many people in the political and religious circles in Australia, Indonesia, and other places.

In 1998, to put into practice the [multicultural] teachings of the Avatamsaka Sutra, Master Chin Kung proposed the concept that all religions are the compassionate and loving teachings of God and sages, and that all gods and sages are the manifestations of one true God. Taking the initiative, he visited the leaders of the nine major faiths in Singapore and also invited lecturers from all faiths to the Singapore Buddhist Lodge to introduce the teachings of their religions. These lectures proved to be very successful. The Master also spoke at the Multicultural Forum hosted by the Department of Immigration and Multicultural and Indigenous Affairs of Queensland in Australia.

In July 2003, the UPEACE Asia Pacific Program facilitated the Network of Universities and In-stitutions for Asia-Pacific Peace-Building and Conflict Prevention in Bangkok, Thailand. The topic was “Religion: Is it About Peace or Conflict?” Master Chin Kung represented Griffith University at the seminar and gave a speech. In August of the same year, he was invited by the Australia Council for the Promotion of Peaceful Reunification of China (ACPPRC) to participate in “Ten Thousand K to a Brighter Tibet,” a charity event that raised funds for medical equipment and treatment for Tibetan cataract patients.

As disasters, terrorist [attacks], and many contagious diseases continue to ravage the world, the yearning for peace and stability increases every day. The concept of “a harmonious universe; a global family” has elicited a positive response from all directions.

In November 2003, Master Chin Kung, at the invitation of Vice President Hamzah Haz, visited Indonesia for the first time. He met the former president Mr. Abdurrahman Wahid, many ministers, and religious representatives. In a conversation with them, the Master emphasized repeatedly the im-portance of the propagation of religious education and made many constructive suggestions for racial harmony and for social stability and peace. Later, Mr. Wahid, the ministers, and the representatives all warmly invited the Master to make more frequent visits to Indonesia to give Dharma talks.

In April 2004, the Minister of Religious Affairs of Indonesia, Dr. Said Agil, invited the Master to visit Indonesia again. During his speech titled “Humanity, Love, and World Peace,” the Master earnestly explained that social stability and world peace must be founded on the restoration of the moral teachings of the sages.

In January 2004, at the invitation of UNESCO and Asia NGO Summit for International Contribution, Master Chin Kung attended the conference “Education for Sustainable Development” in Okayama, Japan. The Master gave a speech at the conference. The several days of discussions allowed him to discuss and exchange ideas with religious leaders and scholars from all over the world on how to resolve conflict. The Master presented the ancient sages’ concept of “Education is essential in building a country and in guiding its people.” He explained that all religions are a teaching of compassion and loving-kindness, and also that to resolve conflicts and avoid disasters one must start by first resolving one’s own internal conflicts and grievances. If everyone resolves his internal conflicts, his mind will be pure and benevolent. Then the world will have a bright future. The Master’s gracious and gentle bearing, sincere words, and easy-to-understand explanation of his profound views left a deep impression on the religious leaders and scholars of different races and cultural backgrounds. They expressed a sincere admiration for the Master.

During the past ten years, the Hwa Dzan and the Xiao Lian (Filial Piety-Honesty) Scholarships that Master Chin Kung established in China have helped numerous students complete their studies. In recent years, not only has he offered financial assistance to the projects of multiculturalism and peace at Griffith University and at the University of Queensland, but he also established a scholarship at the University of Southern Queensland. At the beginning of 2004, the Master contacted the Ministry of Religion of Indonesia in regard to the establishment of scholarships in Indonesian universities for students who have a religion and major in humanities, theology, or philosophy. As many as 3,500 students will get this financial assistance every year.

In recent years, Master Chin Kung has been actively advocating the teaching of compassion and loving-kindness as taught by ancient sages, religious harmony, multiculturalism, and racial equality. He hopes to cooperate more with people of vision and foresight to help resolve chaos and conflicts in this world and to promote world harmony and stability.