The Rationale for the Ancestral Memorial Hall

As early as 40 years ago, in view of the lack of etiquette and the decline of civilised values around the world, the most venerable Master Chin Kung initiated the establishment of the Ancestral Memorial Hall.

Master Chin Kung said, ‘currently, all countries in the world put tremendous attention to the constructions of materialism. Even if they did their ultimate best, they may be wealthy yet they could not obtain genuine happiness. Strong countries in Europe and America are examples. The reason is that they have not built the richness of spirituality, and the essence of spirituality is in the ancestral shrines. Hence comes the urgent need for the Ancestral Memorial Hall. 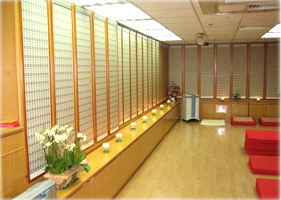 In order to propagate the Buddha’s teachings to the world, the only way would be the establishment of proper Buddhist monasteries. In order to recover and promote Chinese culture to its former glory, traditional ancestral shrines are a must. These two tasks must be undertaken in parallel. Why? The destruction of ancestral shrines is the destruction of etiquette and music. The diminishing of etiquette and music is the diminishing of Ren and Yi, kindness and righteousness, and would result in the diminishing of morality. Under this situation, the society could go nowhere but chaos. People nowadays want to salvage the extremely chaotic world but could not. Why? If the society could not be transformed, the re-establishment of Buddhist monasteries would only be another place for worldly competitions. The wise would not do this. We should start with the recovery of ancestral shrines, followed by the re-establishment of proper Buddhist monasteries. It is in this way that we could have effective results.

The essence in commemorating ancestors is to remember our origin, the ‘returning to our origins.’ Rituals of sacrifice and commemoration are of utmost importance in ancient Chinese ceremonies. They are good manifestation of utmost sincerity in the daily lives. This is a fundamental way of self-improvement and cultivation.

There are three sacrificial activities. Firstly, sacrificial ceremonies for the ancestors. The Chinese would pay respect to their deceased ancestors on the Qing Ming Festival, Clear and Bright, and on Dong Zhi Festival, Winter Arrival. These activities are real life educations for all people on honesty, trust, loyalty and respect. They also teach the people to respect the deceased as if they were alive. Such activities would generate genuine compassions for those who would demonstrate filial piety, and who would obey the social norms, and would further enhance harmonious societies and the prosperity and peace of the country. This is a foundation for us to recover the glory of Chinese culture so as to lighten the world, to enable all beings in the world to enjoy peace and harmony.

The third sacrificial ceremony is to the holy spirits, which represent all things in universe. The purpose of this ceremony is to teach people to love and respect all things. The respect comes in the forms of various arts and should not be considered as superstitions. Examples are earth god, mountain god, sea god, tree god, flower god and grain god, also as gate god and stove god. All these are different ways of expressing respect to all things in the world. The symbolic meaning behind this is sometimes beyond normal people’s comprehension.

The Buddha’s education is a teacher’s education which is based on filial piety. The filial piety is also a fundamental element of Buddhism. A society without filial piety, without education and Buddhism is a society that is doomed to have all kinds of disasters, the End of the World, as has been described in some religions. We, the Buddhists, should work diligently to cultivate our filial piety in the hope that wherever around the world, as long as there are Chinese people, we should establish an ancestral shrine to commemorate them. We can start from building a shrine for the ancestors of the peoples in one country and work our way to build ancestral shrines for beings of all nine realms. Such great filial actions would definitely transform bad to good, and from delusion to enlightenment. These would be the genuine blessings for all peoples.

The purpose to establish the Ancestral Memorial Hall is to provide a means for all to learn from the filial deeds in the past. The Buddha says, ‘the merits of such deeds are immeasurable, beyond words, beyond limits and beyond any mathematical calculations.’ We must have faith in this.