He is meek and soft-spoken but his actions speak louder than words.

He travels the world with a mission almost impossible. He is out to promote world peace. He gives Dharma talks on peace and harmony, akin to sharing a recipe for an ailing world. He promotes peace and harmony within society – saving marriages on the verge of break-up and turning foes into good neighbours.

He also supports charities regardless of religion and race. He has visited Catholic homes for the aged, helped in Muslims’ fund-raising campaigns and erected a monument for native Australians. He has donated food and clothes to the needy in disaster areas, too. 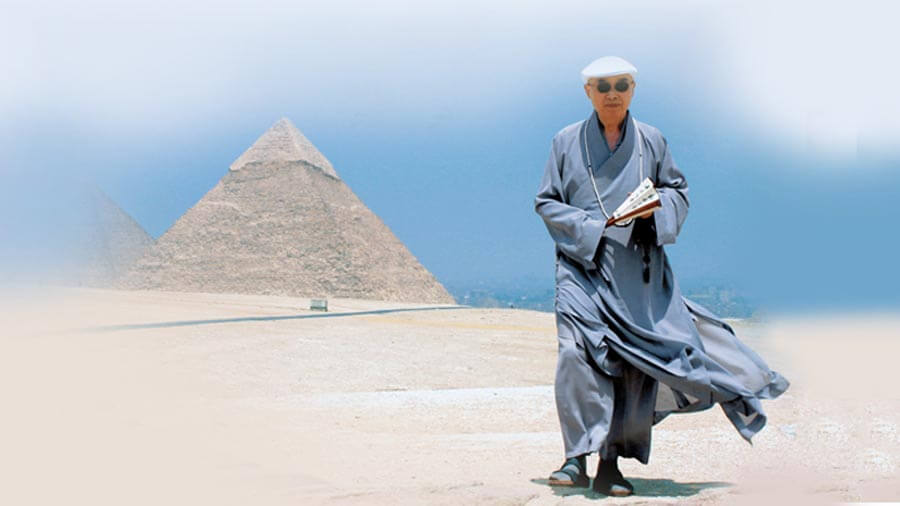 Championing world peace and a much-sought-after speaker, Venerable Master Chin Kung aspires to lofty ideals. World peace may seem elusive yet Chin Kung soldiers on, convinced that people will one day stop killing one another and heed his call for peace.

Is it not a lost cause, then?

“Just follow the circumstances. If opportunity knocks (to campaign for world peace), answer the call. Go forth and spread the message. If there is none, so be it,” says Chin Kung, 80, in a recent interview with StarTwo.

“Just follow the circumstances. If opportunity knocks (to campaign for world peace), answer the call. Go forth and spread the message. If there is none, so be it,” says Chin Kung, 80, in a recent interview with StarTwo.

“There are many peace-loving leaders in the world. Many of them love peace but don’t know how to bring peace. All thos who attended meetings of the United Nations are peace-loving folk,” the Mandarin-speaking Buddhist monk says through an interpreter.

The writer’s suggestion that “if women leaders ruled the world, maybe we stand a chance of attaining world peace” elicited laughter in suite of the Palace of the Golden Horses in Seri Kembangan, Selangor, where the interview was held. Sitting in the background and listening in on the interview were a dozen or so leaders of multi-cultural religions, all Chin Kung’s guests.

“It’s not a gender issue. It’s about education. If we can implement the teachings of the saints and sages – morals, ethics and karma (the law of cause and effect) – problems (and conflicts) can be solved,” Chin Kung replies.

He was recently in Malaysia to give Dharma lectures at Save the World from Disasters and Bring Peace and Harmony to the Earth at the Malaysia International Exhibition and Convention Centre in Seri Kembangan. He was here at the invitation of the Chief High Priest of Malaysia, Rev K. Sri Dhammaratana Maha Nayaka Thera and Tan Sri Lee Kim Yew, founder and managing director of Country Heights Holding Berhad.

Chin was born Hsu Yae Hong in Lujiang county, Anhui province, China, in 1927. He grew up in Cheino in Fukien province and studied at The National Third Kuichou High School during World War II and later at Nanking First Municipal High School after the war ended.

Reminiscing about his childhood, he says: “We grew up in the countryside which was very backward. But the good thing was, it retained the tradition and culture of China, such as moral ethics – how to deal with people: parents, the elderly and teachers.”

His mother was a housewife and his father, a military man. He spent little time with his father who was always away. Raised by his mother, he was “influenced” by her.

“Although she was illiterate, she taught by example. She walked her talk,” he says.

Chin Kung is the eldest of three children; he has two younger brothers. They never fought but helped one another.

In 1949, he went to Taiwan and served as a junior officer at Shihchien Institute.

Over the next13 years, he studied the classics, history, philosophy and Buddhism under the guidance of Professor Fang Dongmei, a great philosopher of his time; Zhangjia Living Buddha, an eminent monk of the Tibetan Buddhist tradition and Li Bing-nan, a Buddhist Dharma master.

At 32, he became a monk at Lintzi Temple at Yuanshan, Taipei, and was given the name Chin Kung which means pure emptiness. He explains: “The name has a very deep meaning. It means pure mind, pure heart.”

Since his ordinament, he has lectured extensively around the world, on how to resolve unrest and conflicts, and restoring the teachings of the ancient sages to their rightful place in education.

Well-versed in the sutras and commentaries of various Buddhist schools, he also studies the teachings of other religions.

Chin Kung is dedicated to spreading Buddhist teachings and sutras. He is the founder of the Hwa Dzan Monastery, the Hwa Dzan Buddhist Library, the Hwa Dzan Lecture Hall, and the Corporate Body of the Buddha Educational Foundation in Taipei.

Chin Kung is also the founder of over 200 Pure Land Learning Centers – with one Pure Land College in Toowomba, Queensland – and Amitabha Societies all over the world.

“The centre is for scholastic pursuits and emphasises grooming future teachers and lecturers. The Society is more about cultivation of the followers,” he says.

Chin Kung’s teachings can be summed up in these principles: sincerity, purity of mind, equality, proper understanding, compassion, seeing the truth, letting go, attaining freedom, being in accord with the situation, and being mindful of Amitabha Buddha.

He immigrated to the United States in 1985 and was awarded Honorary Citizenship in Dallas and Texas. In 2000, he immigrated to Australia. Now he is based in Hong Kong and Australia. He has Internet and satellite television broadcast facilities (since 2003) in both countries to broadcast his Dharma teachings to the world.

Chin Kung wrote to many world leaders to spread the message of peace. He wrote twice to President George Bush. He had known him since Bush was Governor of Texas and conferred the Honorary Citizenship award on him. It did not matter that Bush did not reply to his missives. Chin Kung was happy that Bush was delighted with his gifts of two carved seals bearing the messages God Loves All and Angel of Peace.

Chin Kung is no seeker of fame and fortune but leads a simple life of teaching (giving Dharma talks) and reading.

“For some 40 years, I never watched television, read newspapers or listened to the radio,” says Chin Kung.

Chin Kung’s philosophy in life is: “Life is eternal, life is also equal and life is all good. He who understands this line of thought will not become evil but will turn his belief into awareness. Education is key.

“In Buddhism, peace is the core concept for guiding all beings. Whether or not peace can be achieved depends on ‘equality’. Only with a non-discriminatory mind will peace be realised.”