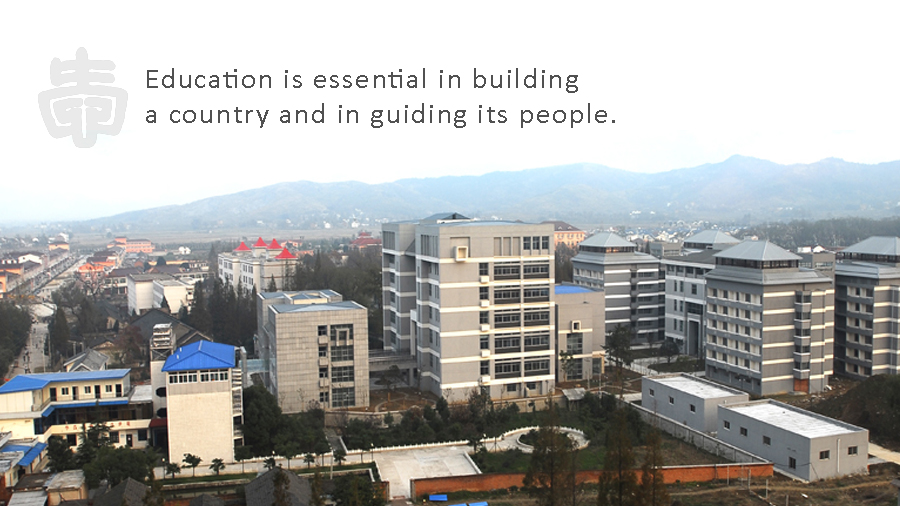 A Brief Introduction to the Lujiang Centre of Cultural Education

It has been a common aspiration for humans to co-exist peacefully and harmoniously since the very beginning of civilisation. In China, President Hu Jintao put forward to all the people to ‘rebuild a harmonious society’. At the 60th World Summit of the United Nations, President Hu also advocated to ‘build a continuously peaceful and commonly prosperous world of harmony’. What is the best way to realize this ideal, a goal for all the Chinese people and even for all the people in the world? It is said in Book of Rites, a more than two thousand year old traditional Chinese classic, that ‘Education is the most important element in establishing a nation and guiding the people’. This is recognised as eternal truth in both ancient and contemporary times, and can be demonstrated from an historical perspective of China as well as from rich experiences drawn from all over the world.If we look back to China’s history, we can see that for most part of her five thousand year history, the country has largely followed a peaceful and united path, and the Chinese people have enjoyed a stable and harmonious life. In the same way China has also held on to a foreign policy of ‘promoting virtue education and appeasing the barbarians’. It has been accepted that the harmonious situation, both inside and outside China, depends on educational policies based on the ethical guidance provided by Confucius and Mencius. As the former Chancellor of the Republic of Germany, Mr. Helmut Schmidt noted, ‘in history, no matter how powerful the Han-ruled China was, seldom did it conquer other countries by land expanding.’ It was for this reason that the late famous British philosopher of history, Arnold J. Toynbee claimed in his unique wisdom that: ‘Only China’s doctrines of Confucius and Mencius and Mahayana Buddhism can resolve the social problems of the twenty-first century.’Yet, if we look around at the world today, we can see many conflicts between different countries and between diverse ethnic groups. Especially since the event of September 11th 2001 in the USA, horror has clouded human society and human hearts. At the same time, the natural ecological balance is under severe strain; worldwide social problems are emerging one after the other, and it is alarming to see the increasingly degeneration of general social and moral atmosphere, prevailing of materialism, seeking profits in violation of moral principles, higher and higher rates of divorce, the horrific types of juvenile crimes, etc. The fundamental reason for all the chaos and disorder in the society is that ethical and moral education has been neglected over the past centuries.Ven. Master Chin Kung, the General Supervisor of the Centre, has taken an active part in UN conferences on world peace many times. Facing the world full of constant conflicts, Ven. Master Chin Kung understands clearly that to reconcile conflicts and promote world peace is the most desired aspiration for all human beings in the contemporary times. The fundamental way is to regain humanity and loving-kindness that origins in human nature. And this can only be realized by traditional Chinese ethical and moral education, the contents of which are ‘to treat each other with humanity through filial piety, fraternal love, loyalty and trustworthiness, and to live together peacefully by being courtesy, righteousness, honesty and honor’. The essence of traditional Chinese ethical education is an education of love and compassion, and its goal is to build a harmonious world in which everyone treats each other sincerely, honestly, friendly and each has his/her own role to play and each is properly provided.Nearly eighty years old, Ven. Master Chin Kung still makes great efforts to get human, financial and material resources home and abroad together to establish the Lujiang Centre of Cultural Education at his hometown, Tangchi Town, Lujiang County, Anhui province of P. R. China.At the heart of the education in the centre is excellent traditional Chinese culture, especially emphasizing filial piety to one’s parents, respect to one’s teachers and others, the virtues fundamental to be a good person. Ven. Master Shi Chin Kung did not establish the centre for the purpose of fame or gaining a grand reputation, but rather to carry on a cause to benefit the people and society. It is his intention that all the teachers in the centre will go to every household, every village and every town to provide lessons and to talk on ethical and moral principles so that the Lujiang people will become excellent citizens: benevolent fathers, filial sons, compassionate leaders, loyal subordinates, affectionate husbands or wives, fraternal brothers or sisters, and trustworthy friends. They will start with the fundamental education such as how to be filial to parents, respectful to teachers, compassionate to the elders, caring the young, modest to neighbors, and friendly and honest to each other. It is by these gradual and continuous efforts that the ideal goal of a happy life, affectionate family, trustworthy business and harmonious county can be reached, by which Lujiang will become a model county demonstrating traditional Chinese virtues of propriety, righteousness, harmony and peace, where people will not pick up the lost of others (so that the owner could come back and find it), and the villagers do not need to lock the door when they are out (because everyone is properly educated and no one will steal anything from the house). Ven. Master Chin Kung also expects the centre to act as a bridge to communicate with abroad. It is hoped that by learning courses on traditional Chinese culture and by paying visits to Lujiang, the model county of harmony, friends from all over the world will get to understand the essence and meaning of such virtues as ‘humanity, love, modesty, kindness, tolerance, forgiveness, propriety and righteousness’.

In order to train educators who devote to moral education and to improve people’ s moral cultivation, a variety of short-term series of seminars and teaching courses have been arranged in the centre. Now the Series of lectures on the The Standards for Being a Good Student and Child, Series of lectures on happy life, Series on traditional art, talent and skill have been warmly welcomed by the teachers, public officials, students and fellow villagers.

In August 2005, Ven. Master Chin Kung attended the International Symposium on ‘Cultivating Wisdom and Harvesting Peace’ organized by Griffith University in co-coordination with the UNESCO, where he gave a keynote speech entitled ‘Enhancing ethical and moral education, promoting world peace’, pointing out that ethical and moral education plays an important role in resolving conflicts and attaining perfect harmony in one’s body and heart/mind, in the natural environment, and in the world. Thus the centre also provide the whole world with distant moral culture education courses focusing ‘humanity, love, harmony and peace’, delivered via the internet.

The Lujiang Centre of Cultural Education is located in the Dabie Mountain natural scenery area, with beautiful hills, clean waters, flourishing bamboos, and clearly cut seasons. As a non-profit and non-governmental organization, the centre is dedicated to the purification of the human heart, to building a stable, peaceful and harmonious society, to realising Chinese ethnic revival, and to promoting world peace through sincere, diligent and practical education. ‘Those of virtue will never be alone, they always have companions’ (The Analects). We sincerely welcome all the people from China and the world who share the same intention to join us to study here and to contribute to the cause.