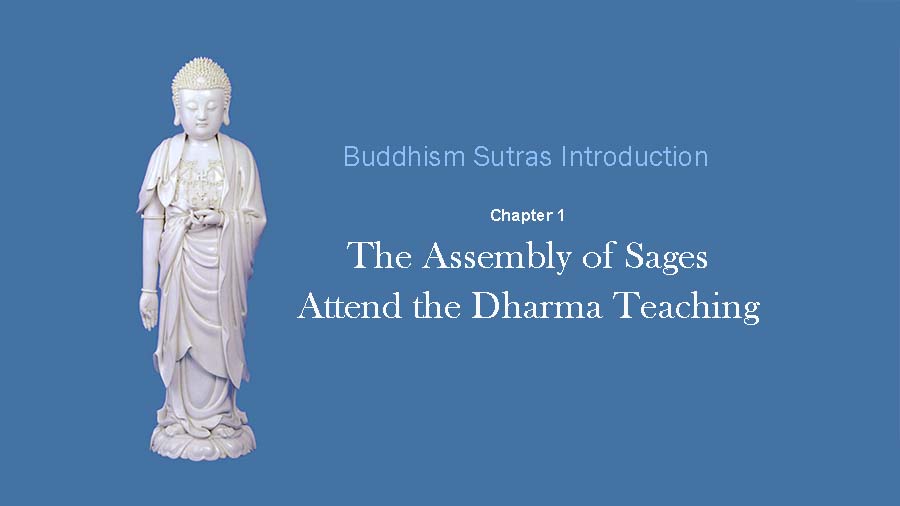 Observing that the opportunity is near for a certain number of people to attain Buddhahood, the Buddha then started this Pure Land teaching.

It was in the city of Ragagriha, on the mountain Gridhrakuta, that an assembly of twelve thousand of the Buddha’s great Bhikshus (monks), together with those great Bodhisattvas, attended this teaching.

Venerable Kondanna was the first one to actualize the achievement of an Arhat from the Buddha’s teachings. His presence at this teaching represents that the Infinite Life Sutra is the foremost teaching for all Buddhas in helping sentient beings to escape the cycle of birth and death.

Venerable Sariputra was the student foremost in wisdom. One who can believe this sutra and put this teaching into practice will attain foremost wisdom.

Venerable Mahamaudgalyayana was the foremost in spiritual penetrations. Once one is reborn into the Western Pure Land and later becomes a Buddha, aided by Amitabha, one recovers this foremost innate power.

The first Patriarch in the Zen school was Venerable Mahakasyapa who also attended this meeting.

Venerable Ananda did the primary work of compiling the Buddha’s teachings into sutras.

For one to become a lefthome person, one must have planted good roots in past lives. One time Buddha Shakyamuni tested his student’s ability to decide whether to accept an old man who asked to be a monk. An Arhat is capable of knowing a being’s past lifetimes over many lifetimes. All of the Buddha’s Arhat students doomed the old man as a prospect, because they thought that he had no connection with Buddhism in his past lives. Shakyamuni then announced that many aeons ago, this old man was a woodchopper. One day when he ran into a tiger on the mountain, he climbed up a tree to escape, calling out, “Namo Buddha” (Homage to the Buddha) for help. With only those few words, the old man planted his good roots. In this life, he became a monk as he had wished and later attained his Arhatship.

The Buddha gave this Pure Land teaching as a special way to help beings in this Dharma Ending Age.

For one to be able to accept the Pure Land teaching, one must have previously nurtured countless good roots.

The attendance of the great Samantabhadra Bodhisattva at this teaching symbolized the unity of the Pure Land and Esoteric Schools.

The presence of the great Manjusri Bodhisattva symbolized the integration of the Zen and Pure Land Schools.

Both of these venerables represent that all the teachings of the Buddha are contained within this sutra.

The great Maitreya Bodhisattva is currently in the Tusita Deva (a level in heaven). After 5,706,000,000 years, he will appear in the human realm and become the next Buddha in this world.

In our current aeon, one thousand Buddhas will appear in our world. Buddha Shakyamuni was the fourth; Maitreya Bodhisattva will be the fifth. All these great sages came to this teaching as well.