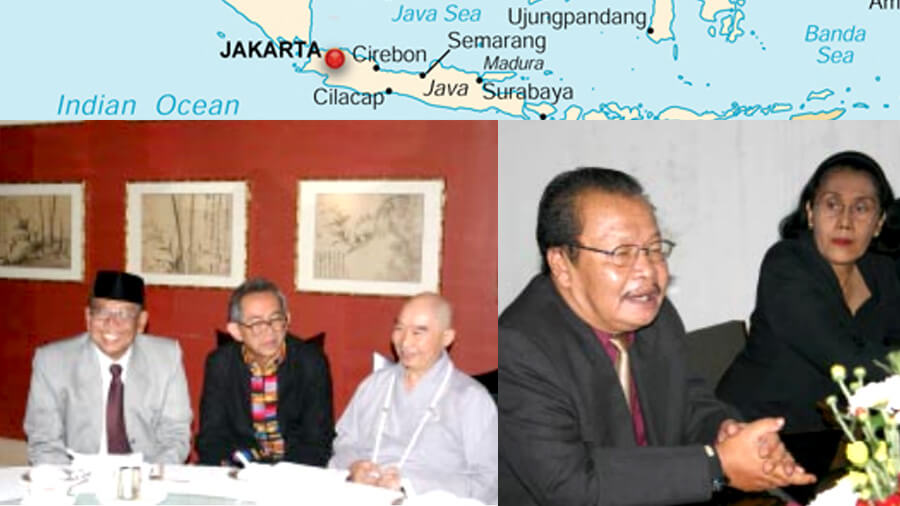 On the 30th of October, 2003, Venerable Master Chin Kung, Honorary Professor of both Griffith University and the University of Queensland, hosted a dinner party for leaders from five different religions – Islam, Christianity, Catholicism, Hinduism, and Confucianism – at the Shangri-La Hotel in Jakarta. Sitting together, they discussed how to promote inter-religious equality and harmony based on mutual respect, mutual learning and cooperation, with the goal to stabilize society through religious education. A harmonious and joyful atmosphere permeated through the entire dinner party. All the religious representatives freely expressed their ideas and together they formed common views on promoting religious education. At the close of the dinner, Venerable Master Chin Kung presented each religious representative with a gift, including a framed picture Living in A Grateful World. The main content of their discussions is summarized below.

Islamic leader, Prof. Dr. M. Din Syamsuddin, Vice President of the Central Board of Muhammadiyah, asked about the purpose of Venerable Master Chin Kung’s visit to Indonesia at this time.

Venerable Master Chin Kung:
I was invited by the Vice President of Indonesia to give a keynote address at the 75th Youth Day Ceremony and also to have a meeting with him in his office. In our meeting, the Vice President mentioned the two major problems facing this country. The first is the economic. The second is the problem of social instability problem. He wished for us to offer him some assistance in resolving these problems. In fact, the economic problem should be the second concern. The problem of social instability ought to be the No.1 problem. A stable society will naturally attract investors and business people to infuse capital into the country, causing the economy to grow. To stabilize the society, we have to rely on religious education. The Vice President said Muslims should practise what Allah has taught, and he wished that we Buddhists also practise the teachings of the Buddha. This is exactly correct.

Mr. Theophilus Bela, General Secretary of ACRP Indonesian Committee on Religion and Peace, expressed his gratitude to Venerable Master Chin Kung for inviting him and his family to the dinner.

Venerable Master Chin Kung:
Different religions should be united. The foundation of unity is to treat each other with equality and to live together in harmony. This is based on the Confucian idea that the intrinsic nature of all human beings is kind. It is also based on the Buddhist belief that all living beings and Buddhas are equal in nature. Thus, different ethnic groups and religions are equal in nature. How do we practise it? Religions should encompass each other, respect each other, trust each other, be modest and love each other, and care for each other. This is the idea that I have in mind when working on inter-faith harmony in Singapore and Australia. The most important aspect of this work is our sincere mind. It is said that utmost sincerity can crack open the hardest gold and stone. So if we are not successful, it implies our sincerity is not enough.

A Confucian representative asked Venerable Master Chin Kung:
I heard that Confucius theories were adopted by Buddhism as the teaching materials in China. Why?

Venerable Master Chin Kung:
Buddhism is the education that helps enlighten people, and there can be many teaching methods. As long as the teaching method is effective, no matter if it is Confucianism or one of the other religions, it can be adopted. Confucianism is the foundation of Buddhism. This is because Buddhism reveres teachers and their teachings, and Confucianism values the filial piety the most. Revering teachers and their teachings is built upon filial piety. When Buddhism was introduced into China, it was well accepted by the Chinese scholars, because Chinese scholars already had a good foundation in Confucianism.

Most important to learning is wisdom. To obtain wisdom, one has to first broaden one mind and see further into the future. No matter whether one chooses to study Buddhism or to study Confucianism, one needs to learn all relevant subjects. I am learning Buddhism, but I also study Confucianism and other religions in order to enhance my learning. In our learning efforts, we should have our own main subject of focus and learn other subjects to aid our main study. For example, Christians should major in the Old and New Testaments and, at the same time, also should learn other religious scriptures. To do so is to avoid bias and prejudice. We should not think that our teaching is superior to other teachings. Indeed, every subject is good. While Buddha Shakyamuni is my teacher, Jesus is also my teacher. We should respect all religious saints. For this reason, I did not hang the Buddhism couplets on the front wall of our Ten Thousand Ancestors Memorial Hall in Toowoomba, Australia. Instead, we hung the selected verses from different religions’ scriptures. By broadening our minds we can live a very comfortable life. Hence, we will be always young; we will not get old. And God and all saints will bless us.

Pastor Dr. Mattheus Max Djayasaputra:
I am very happy to come to tonight’s dinner. We religion followers should not just believe God in mouth, but we should believe God in heart. The belief has to arise from the deep heart and is reflected in one’s speech and action.
Venerable Master Chin Kung reaffirmed his words by saying, “This is exactly right.”

Attendance:
Some individuals are fond of wars. They are highly educated people. How can they do such cruel things?

Venerable Master Chin Kung said with a humorous tone:
These individuals never received any education. At best, we can say that they have received training in advanced technological knowledge and skills. Authentic education lies in moral cultivation and in how to conduct our lives. The ancient educational system started in the elementary school with teachings of rules and disciplines, teachings people on how to do housework, how to communicate with people, and how to be an upright person. Now, PhDs, knowledgeable as they surely are, may not even know how to conduct themselves wisely.

A lady who represented Islam:
I have attended some conferences on religion and peace but I feel that tonight’s gathering with the different religions is particularly good. I hope that Venerable Master Chin Kung can come to Indonesia again to propagate inter-faith communication.

Islamic representative Dr. H. Amidhan, Chair of Sub Commission for Mediation, The National Commission on Human Rights
I am very happy to meet Venerable Master Chin Kung tonight. We can accept his thoughts very well. Indonesia is a multi-ethnic group country. We all should strive to promote inter-religion harmony, peace and democracy.

Venerable Master Chin Kung:
Indonesia is a country of thousands of islands. To promote religious education is not an easy task. Australia has a vast territory and faces a similar situation. So Australia pays particular attention to distance learning using the Internet and TV networks. This practice is very effective and can be a good example to follow.