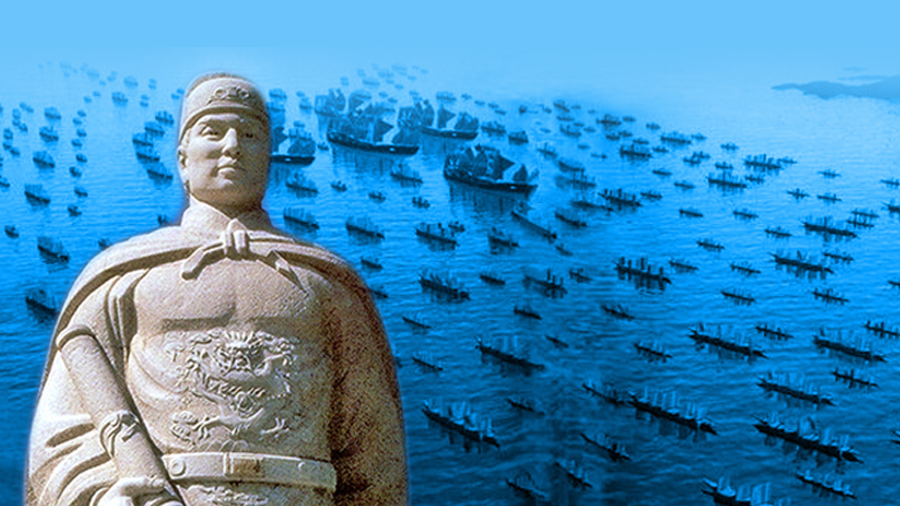 On his voyage in the nineteenth year of the reign of Emperor Cheng Zu (1421-1423), Zheng He made his most important discoveries. Zheng He divided the fleet into four teams, each sailing a different route. They traveled to every continent in the world, passing through sixty-two archipelagos, totaling over one thousand seven hundred islands. As a result, cartographers were able to make tens of thousands of coastline maps. His fleet passed through the Indian Ocean and arrived at the east coast of Africa. They then navigated through the Cape of Good Hope, passing through the Atlantic Ocean, Caribbean Sea and found the Arctic and South America. They then traveled south and found Antarctica. From there, they sailed through the Pacific Ocean and landed in Australia and New Zealand. This tells us that Zheng He’s fleet discovered Australia and Antarctica three hundred fifty years earlier than Captain Cook, traveled around the world one hundred years before Magellan, and landed on the American continent seventy years ahead of Columbus.

Zheng He truly was a great navigator! He possessed the wealth of knowledge, courage, and wisdom to command his fleet through vast oceans amidst trying conditions, and found new lands and discoveries for the human race. His rarest quality was that as a faithful Muslim, he adhered to the moral and virtuous teachings of the Koran; he personally exercised the infinite mercy of Allah for all human beings and displayed his traditional Chinese cultural wisdom of peace and loving-kindness. During his seven expeditions, no colony was ever established and not an inch of land invaded or claimed by his presence. He contributed to the local people by providing better farming techniques, technical advances, and cultural exchanges. The locals gave him the title “Three Protector Eunuch”. Even today, there are still many popular temples of Zheng He in the various regions of the South Pacific.Gift exchanges were prominent events for Zheng He. When the locals sent their regards to the Chinese Emperor in the form of local produce, the Chinese Emperor reciprocated by giving at least double the amount of gifts received. This was the way of expressing friendship and sincerity. The Chinese cultivated this mentality through years of moral education starting from youth. Traditional Chinese family education taught their young to always exercise kindness, generosity, consideration, and sincerity to others. This was seen in Zheng He’s foreign policy of harmony and peace towards different countries, groups, and religions.The core of traditional Chinese education could be summed up with the word “love” or education of love. Since ancient times, Chinese have been nourished by such education. In the five thousand years of recorded history, whenever the tribe of Han ruled the land, China had never invaded other countries. One will not find a war initiated by the Chinese for the purpose of occupying another’s land. It was a country of peace simply because they had been receiving education of peace and love. They would willingly sacrifice their lives for others and would not invade or take from others by force.Zheng He, the navigator from the fifteenth century, brought Chinese skills and knowledge to benefit people around the world across great distances. At the same time, he spread the peace loving spirit of the Chinese to the five major continents of our world. He brought prosperity and wealth to people at that time. Today, after six hundred years, his past deeds give us much inspiration about how we can bring forward peace and harmony through the spirit of honesty, sincerity, compassion, and love. The message of “benevolence, compassion, universal love, sincerity, respect, humility, and harmony” was not just the essence of Chinese traditional education: it was the common teachings and guidelines of all religions and their saints and sages. It represented the innate purity and goodness that all beings possess originally. It was no wonder that many eastern and western scholars, including the renowned English historian Dr. Toynbee who extensively studied and thoroughly understood the traditional Chinese culture, believed that the education of benevolence, compassion, and universal love was real. Such teachings and education were all part of the cultural inheritance of humankind. These treasures of wisdom, when properly implemented and enhanced, truly would bring long lasting harmony, peace, prosperity, and wealth to the twenty-first century.
III. Saints and Sages’ Education that Inspires “Wisdom, Benevolence, and Courage”From history, we saw that Zheng He’s exploration was not an easy undertaking and there were many experiences to be gained. He measured the accurate longitude of earth three hundred years before the Europeans and mapped out the positions of many new islands. European navigators relied on his map to find the New World. He adapted to the constantly changing seafaring conditions and always had long-term supplies for his twenty thousand crews. There were times when he encountered pirates and robbers. These problems were resolved with wisdom and courage. He would defeat these enemies and yet always showed mercy and leniency. He made passages safe for friends and visitors from afar to see China. Visitors and delegates from overseas were numbered well above any other times in history.We may wonder where did Zheng He’s spirit, compassion, wisdom, and courage come from. In actuality, it was the result of education from both Chinese traditional education and the education of the Koran. In my lectures, I often mentioned that saints, sages, Buddhas, and bodhisattvas were the end result of appropriate teaching. A good person was the product of good teaching, whilst a bad person was also the product of another kind of teaching. Terrorists were no different. Everything depends on how we conduct education. In order to resolve all conflicts and seek peace, prosperity, and social stability, we have to rely on the education of saints and sages.In terms of education, China has had rich experiences and achievements. While more than five thousand years ago, the Chinese began emphasizing the importance of education, it was not until the reigns of Emperor Yao and Shun that a clear structure was established. According to historical records, in ancient times, Emperor Yao instructed Hou Ji to teach people how to farm. Once the five types of crops were harvested and people’s basic needs were met, the way or path to humanity could begin. After attaining basic needs, if humans were not educated, they would resemble beasts. The saint (Emperor Yao) worried about this outcome and sent Qi to teach the five moral principles to the people: (1) There shall be a loving relationship between parents and children; (2) There shall be loyalty and fairness between leaders and followers; (3) There shall be distinct responsibilities between husband and wives; (4) There shall be order between seniors and juniors; and (5) There shall be trust between friends. This recorded history described how Emperor Yao and Shun started their educational system more than four thousand five hundred years ago in China. 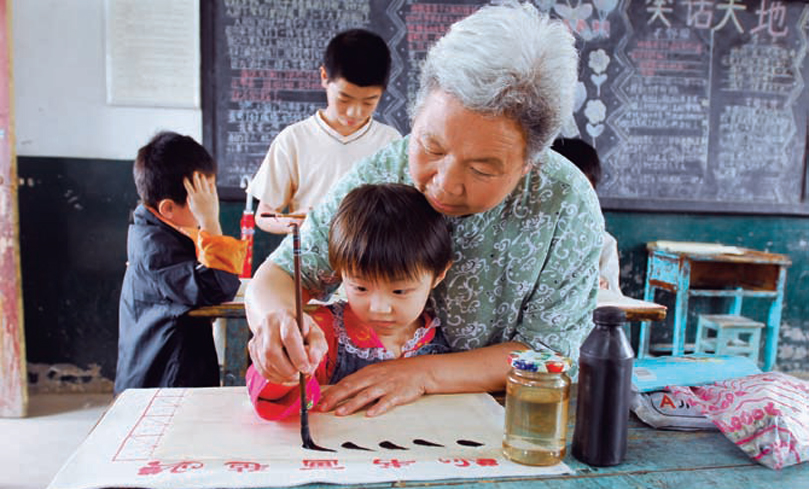 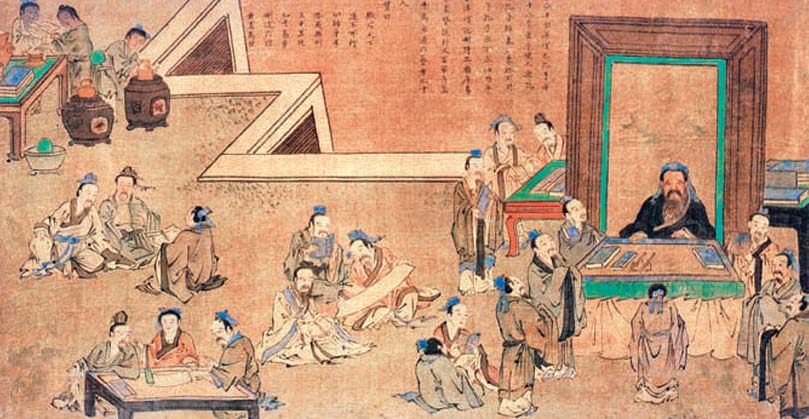 The education of saints and sages was the very foundation to building a harmonious society and world.

Using politics as an example, Confucius said: “The legacy of any political system will only last as long as its leader is still in power.” True leaders possessing wisdom and morals would bring happiness and peace to people whether in a democratic or feudal system, or through separation or unification of church and state. If leaders of nations did not possess morals and thoughts to benefit all people, then no matter how thorough and meticulous the laws were created, they would only be tools for personal gain. Thus, bringing disasters for all. Hence, a democratic system requires all people to hold high standard of morals and virtues. This way people could elect the right person for the government without ill effects. However, if the population could not reach a high moral standard, monarchy would be a better choice for the benefit of the majority. A monarch would want to solidify his reign and he or she had to employ the best possible teachers to train a good successor. He had to be responsible for the reign of his whole family. In so doing, he must exercise caution and do his best for his people. Otherwise, revolts would usurp his power.Now we look at how ancient Chinese selected talents and capable people. The Emperor instructed the local government officials to privately investigate those who were truly “loving (filial piety) and had integrity” and to escort them to state learning institutions for learning to be of future service to his people. A person who was dutiful and loving at home would certainly be loyal to his country. A person with integrity would not be easily corruptible. Today in every country, from government level down to private sector, we saw corruption and disloyalty run rampant.“Loyalty, filial piety, integrity, and honesty” were the fundamental teachings of the Chinese traditional education system, as well as the teachings of all saints and sages of our world. From this, we see that a saint or sage is a product of good teaching, whilst a terrorist is also the product of another type of teaching.Today, family, formal, and social educations are about teaching people to compete with others for self gain even if it brings harm to others and the society as a whole. Most productions of mass media encourage greed, anger, ignorance, killing, stealing, lust, and deceit. This actually cultivates terrorists and rioters within our society. How could there not be turmoil in the world? To teach is to be a role model for students to follow. To learn is to correct faults and enhance goodness. Today, children are watching adults exercising hatred and revenge to solve problems. In the future, these children will exercise even more violence and hatred to resolve issues. With war, turmoil, and natural or man-made disasters in abundance today, could we not conclude that our present education has gone terribly wrong? To establish a nation and guide its people, education must be the priority. This is the best solution to our current dilemma. All the issues that we face today, some more urgent than others, must be resolved by proper education. All other means are only secondary and can not be used to solve our problems. The improvement of morals and virtues for the entire human race certainly requires urgent attention.V. Promotion of Religious Dialogue, Resolution of Conflicts and ConfrontationsIn the 1970s, English historian Dr. Arnold Toynbee said that in order to resolve the social problems of the twenty-first century, one must rely on Confucianism and Mahayana Buddhism. What were the strengths and values of both teachings? The essence of Confucianism and Buddhism emphasize that the intrinsic nature of human beings is filled with pure kindness. Both teachings seek to change the world through compassion and universal love, by transforming evil to good, enemies to friends, delusion to awakening, and ordinary people to saints and sages. Actually, these goals are common to the scriptures of all faiths and religions. The holy teaching of Islam asked its followers to help those who renounced them, care for those who abandoned them, and forgive those who have wronged them. In Catholicism, its believers are taught to love their enemies. The Buddhist sutra said: “Remember no past sins; resent no sinners”. Similarly, Confucius asked people to reach the “ultimate perfection in compassion”. Mencius asked people to perfect their honor. Saints and sages, no matter when or where they exist, always teach all people compassion and love. 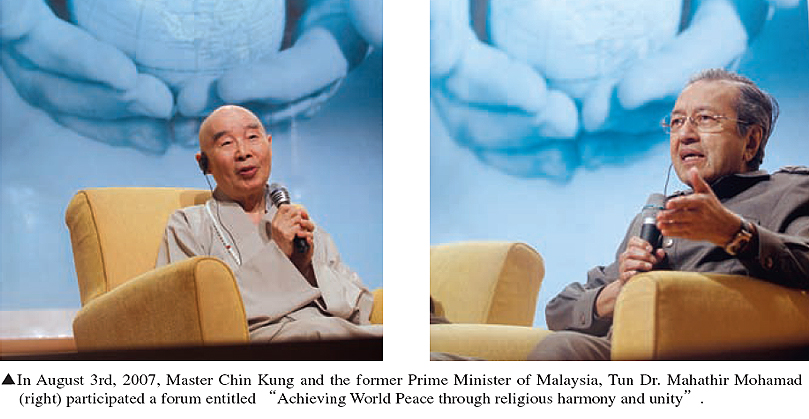