Home About Us Propagating the Buddha’s Teachings through Education 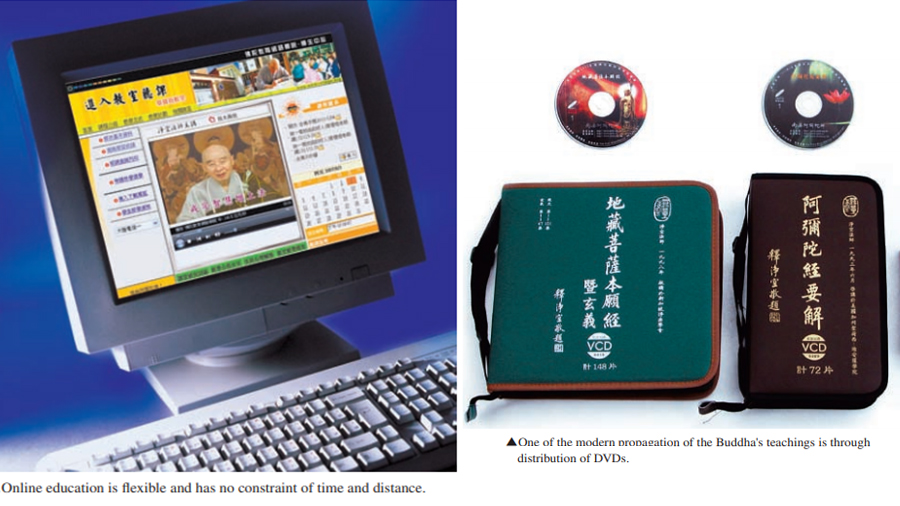 Establishment of the Corporate Body of the Buddha Educational Foundation.

Under the guidance of Master Chin Kung, the Hwa Dzan Dharma Giving Association was established in 1962.  Its purpose is to freely distribute sutras as well as books on morality and ethics.  In January of 1985, the Corporate Body of the Buddha Educational Foundation was officially founded in Taipei.  Its purpose is to promote morality and ethics and to help people give rise to compassion sentient beings.  It does this through the free distribution of books, audio and videotapes, as well as sponsoring lecture series on Buddhism and funding scholarships.

The foundation has printed the Great Buddhist Canon, the works of Buddhist Patriarchs, the Four Books and the Five Classics of Confucius, books promoting morality and ethics, traditional Chinese values.  These have been distributed throughout Asia, Australia, the Americas, Europe and Africa.  In 1998 alone, there were more than two hundred groups throughout the world that had received books and tapes from the Foundation.  More than twenty-eight thousand boxes containing over one million seven hundred thousand books were distributed in 1998 alone.

Buddhism as an Education

Under the guidance of Master Chin Kung, any newly established Amitabha Buddhist Society should set as its priority the free distribution of sutras, audio and video tapes and materials that will help people to understand that Buddhism is an education, a way of living.  Master has always said that Buddhism is mistaken for a religion, and a polytheistic religion at that.  Nowadays, our first priority as Buddhists is to clarify and understand the relationship between the Buddha and us.  We call Buddha Shakyamuni our original teacher because the Buddha and we share a teacher-student relationship.  This is different from religions where the relationship is that of parent-child or master-servant.

Buddhism is a teaching with a high level of artistry.  Every Buddha and Bodhisattva image, every ceremony and offering are perfect expressions of various teachings.  They represent infinite and profound qualities.  When we enter a typical Way Place, we will see the image of Maitreya Bodhisattva situated in the center of the hall of Heavenly Guardians.  With a big smile and huge belly, he conveys the idea that in order to learn and practice Buddhism, we first learn to be cheerful and broadminded, to be tolerant, considerate and impartial to all others.

Four Heavenly Guardians, four Great Bodhisattvas and eighteen Arhats, as well as of water, incense, lamps, flowers and fruit each provide additional teachings.  To worship Buddhas and Bodhisattvas, to burn incense and prostrate to them hoping for wealth or a promotion is superstition and an insult to the Buddhas and Bodhisattvas.  Everything exists according to the Law of Cause and Effect.  If we do not understand cause and effect, do not follow the teachings and principles of the Buddha, but blindly worship, then we totally violate the goal of the Buddha’s teachings.

For forty years, Master Chin Kung has continuously propagated and explained why Buddhism is an education.  Mr. Lian-Ju Xia named the societies Pure Land Learning Centers, another name for the Amitabha Buddhist Societies.  But the idea, originated after World War II, was not implemented until Master advocated the idea of Buddhism as an education, bringing Mr. Xia’s idea to life.

Master Chin Kung has done much for general education.  In 1993, he first set up and funded the Hwa Dzan Scholarship at Beijing University, Fudan University, Liaoling University, Nanjing Normal University and Nanjing First High School (Master Chin Kung’s early alma mater).  In 1998, Master also set up and funded the Filial Piety-Honesty Scholarships in thirty schools.  In five years, he had set up scholarships in eighty-eight schools throughout China, including thirty normal universities, twenty-nine universities, two regional and medical universities, twenty-four junior high schools and three primary schools.  Each year he has donated over two hundred thousand dollars US to fund the scholarships.

From this allocation, we can see that the Normal Universities, which train teachers, have been the primary beneficiaries of the Hwa Dzan and Filial Piety-Honesty Scholarships.  The Master totally agrees with the statement from the Book of Rites, “Education is most essential in building a nation and governing its people”.  He believes that education is crucial for a country to prosper.  The development of education plays a leading role in advancing civilization, stabilizing society and improving the quality of living.  The high level of quality and virtue of teachers plays an important role in the success of the above.

Unfortunately, today in modern society, we are losing our traditional values.  We need once again to emphasize the importance of education, in teaching traditional values so that our children will be proud of their culture, their heritage and their country.  Through education, people will gradually broaden their minds, develop their tolerance of others, carry on and adapt for the modern world, the best qualities of both their heritage and those of other countries.  In this way, the future of our people and country will be bright and full of expectation.  Teachers are the bridge from the past to the present and from the west to the east.  To accomplish this, we need support from government and industrial leaders as well as from society.