Home Buddhism Buddhism : A Most Virtuous and Perfect Multicultural Education 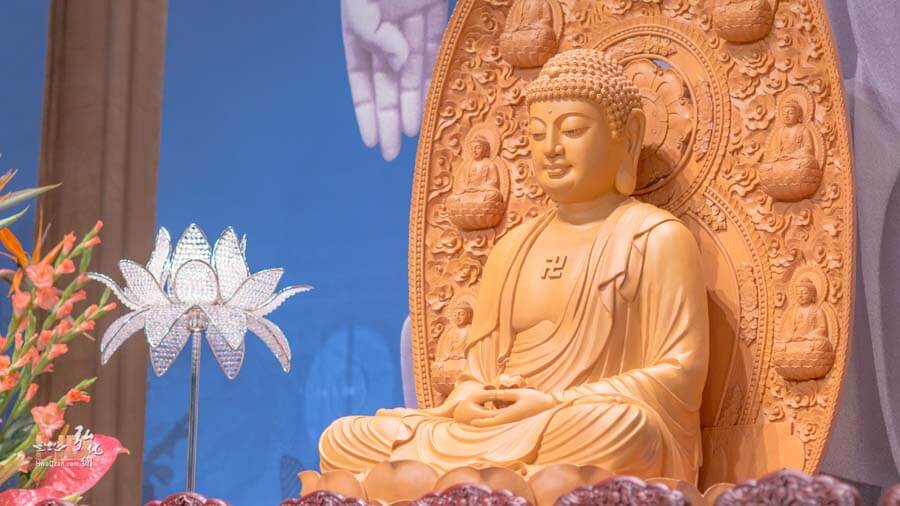 Buddhism is an education of wisdom. It is a most virtuous and perfect education directed by the Buddha towards all beings, regardless of ethnicity, culture, or religion. It covers a boundless range of phenomena and principles that is much broader than that currently taught in modern universities. In regards to time, it encompasses the past, present, and future. In regards to space, it encompasses everything from our daily lives to the infinite universe. The ultimate goal of the Buddha’s teachings is to inspire us to uncover our complete and perfect wisdom, and the virtues and capabilities innate within our self-nature. Moreover, it is by uncovering this perfect wisdom we originally possessed that we will put an end to suffering and experience true happiness.

For Master Chin Kung, promoting Buddhist education in the 21st century to ever-broader audiences must be at the core of the peace process and guide the virtuous societal change that will enable us to avert world crises and natural disasters.

“Buddha” is a Sanskrit word, meaning “wisdom or enlightenment”. It was transliterated as Buddha and not translated into “wisdom” or “enlightenment”, because the meaning of “Buddha” is so profound and extensive that these two words were insufficient to cover the original meaning. Accordingly, transliteration was used and supplemented with further elaboration. In essence, Buddha means wisdom. In its application or function, it means enlightenment.

The founder of Buddhism was Sakyamuni Buddha, who was born 2,500 years ago in northern India. He was the crown prince of the Sakyaclan—and was a man, not a god. At a young age, he realized that the universal sufferings of human life, such as birth, aging, sickness and death, were inescapable. To search for ways to end suffering, he left the palace at the age of nineteen, devoting himself to study and spiritual cultivation, and a life of asceticism. At the age of thirty, he set aside all that he had learned and practised. Under the Bodhi tree, he entered a deep state of meditative concentration and became enlightened, having realized the innately omniscient and omnipotent self-nature. He taught tirelessly on the truth he realized to enlighten all, without discrimination, for the next forty-nine years. His role can best be described in today’s terms as that of a “volunteer multicultural social educator”. We call Sakyamuni Buddha, our Original Teacher, which signifies that he founded Buddhist education, and the relationship between him and us is one of teacher and student.

These three levels of enlightenment can be compared to academic degrees in a college educational system. The level of Arhat compares to a Bachelor’s degree. The level of Bodhisattva compares to a Master’s degree, and the level of Buddha marks attainment of a Doctorate degree. The word Buddha is not exclusive to Sakyamuni Buddha, but is a common title for anyone who has attained the Perfect and Complete Enlightenment. Thus, Buddha, Bodhisattva, and Arhat are but titles to represent the levels of enlightenment in Buddhism. As teachers, they are to be respected but not worshipped.

The Buddha taught us that every living being innately possesses the same perfect wisdom, virtue, characteristics, and abilities as a Buddha. However, our ignorance of the truth overshadows our innate wisdom and generates wandering thoughts, discriminations, and attachments to worldly ideas and things—all of which delude us and lead to various afflictions, such as greed, anger, ignorance, arrogance, and doubt. These misguided and illusory views in turn cause deeds, words, and thoughts to create karma (actions driven by intention that will lead to future consequences). Such karma causes living beings to be continuously reborn within the Six Realms of reincarnation. Inevitably, there is an associated effect for every cause (or karma). Positive karma leads to being born in the three good realms: namely, the heaven, asura, and human realms. Negative karma leads to being born within the three bad realms: namely, the animal, hungry ghost, and hell realms. 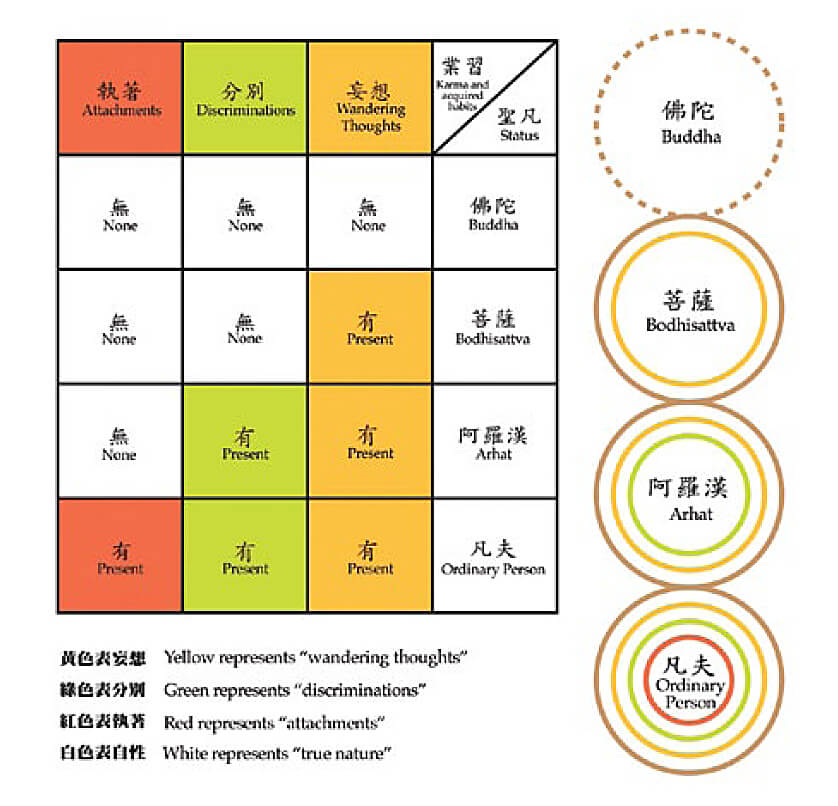 There are ten realms of existence in the universe. Which realm one belongs to depends on one’s karma and degree of awakening. To transcend the Six Realms of reincarnation to the Four Sage Realms, that is the Arhats, Pratyekabuddhas, Bodhisattvas, and Buddhas, one must practise the three key aspects of learning: precepts, meditative concentration, and wisdom. Abiding by the precepts requires maintaining conduct that is beneficial to others and refraining from harming anyone. Meditative concentration involves abstaining from distracting thoughts to enable the mind to achieve calm and focused state. Wisdom means not being deluded by the world’s illusory phenomena and understanding the ultimate truth. By abiding by the precepts, one attains meditative concentration. Through meditative concentration, one realizes wisdom. Such disciplined practice enables one to eradicate the afflictions by letting go of attachment, to attain a pure mind, and to become an Arhat, and eventually to become a Bodhisattva and Buddha, as higher levels of enlightenment are achieved.

The ultimate state realized by Buddhas is called the “One True Dharma Realm”. It is the ultimate true oneness of the Dharma body of Buddhas, which is beyond time, space, arising and ceasing, existence and nonexistence, and internal and external. It is indescribable and formless, beyond human logic and above human reasoning.

Thus, the Buddha’s teachings are about the truth of life and the universe and are referred to as “Dharma”. The objectives of his Dharma teachings are to help us attain worldly happiness and ultimate bliss.

In following the Buddha’s teachings, we become free from errors in our thought, speech, and behaviour. We shall be mindful of the law of causality, which means that we reap what we sow and that no one can step in to bear the consequences in our place. Hence, it is through avoiding all that is evil, impurity for purity is taking refuge in the Sangha. The images of Buddhas, the scriptures, and the monastics serve as reminders and teaching aids to keep us ever mindful of The Three Jewels. They help us along our way to enlightenment. As such, respect paid to the Three Jewels should not be mistaken for a superstitious practice.

The Foundation of Buddhism : Filial Piety , and Respect for Teachers

The quality of being a respectful disciple in Buddhism begins with filial piety to one’s parents at home. Filial piety and respect are fundamental to mastering the Buddha’s teachings, and provide the basis from which all other achievements attained. In some Mahayana sutras, the Buddha taught us to regard all women as our mothers and all men as our fathers. This is the advanced stage for our practice of filial piety, as it requires the practice of true compassion and giving up the “self” for the sake of others. Since every being has the potential to become a Buddha, respecting each being is the same as respecting a future Buddha. Thus, the practice of filial piety and respect is the starting point of awakening. When one has practised these virtues to perfection, one becomes a Buddha.