Home Speeches The Promotion of Ethical and Moral Teachings 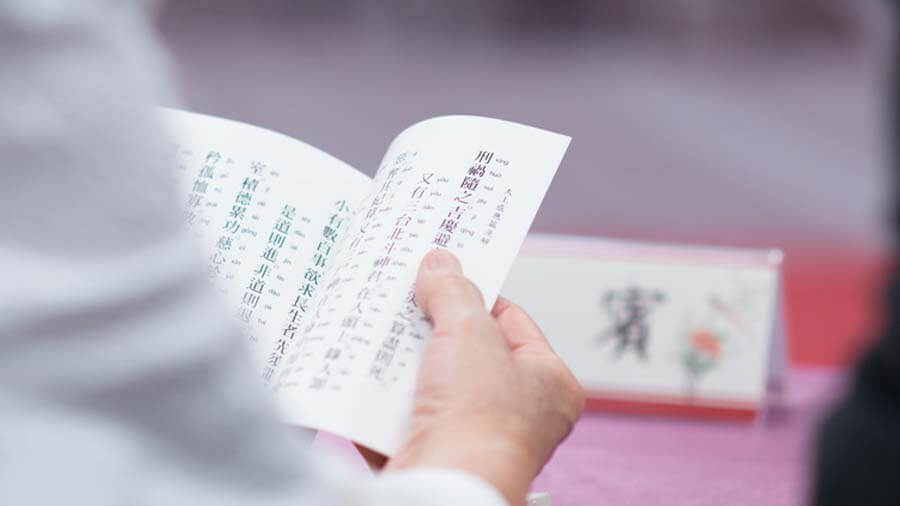 The Promotion of Ethical and Moral Teachings
Venerable Master Chin Kung AM
One Humanity, Many Faiths
An Interfaith Summit for Peace and Harmony in Australia and the Asia-Pacific Region
Brisbane City Hall, Main Auditorium
Brisbane, Australia
February 18-21, 2009

Confucianism says “All people are innately good.” Buddhism teaches “Every being has Buddha nature.” This nature consists of “inherent virtues, which are possessed by everyone.” What are natural virtues? Love is a natural virtue. Having love, benevolence, virtuousness, and compassion, we will follow our natural virtues. By following these virtues, we will generate loving kindness. Thinking carefully, we will realize that those who follow their innate virtues will love others and treat them with benevolence, virtuousness, and compassion. How could this person harm others!

Fighting for personal gain will definitely result in others losing. This kind of mindset will be reason enough for conflicts between human beings. Therefore, the approach to reconcile all conflicts and to promote social stability and world peace does not lie in the use of military force. Then what can we do to change? Ancient saints and sages, Confucius, and Sakyamuni Buddha all reached this objective by teaching. Thus, the only way for us to prevent conflict and promote social stability and world peace is to let go of all struggles for personal recognition and gain. We need to actively promote the enlightened teachings of benevolence, virtuousness, and compassion. This teaching of love in religion is the only method to end conflict and achieve peace.

The implementation of the teaching of love is found in three teachings: Confucianism, Taoism, and Buddhism. The basic elements are Confucianism’s Guidelines for Being a Good Person, Taoism’s Accounts of Request and Response, and Buddhism’s Ten Virtuous Deeds Sutra.

Inspired by Master Chin Kung, students in China launched a series to introduce and explain Guidelines for Being a Good Person on the “Visiting the Classics” program on China National Radio. The broadcast was enthusiastically received and listeners benefited greatly. Following this, some other students toured Haikou City in Hainan Province and Shantou City in Guangdong Province to lecture on Guidelines for Being a Good Person.

Later, under the patronage of Master Chin Kung, the Haikou Preliminary Chinese Classics Center on Piety and Integrity was established to nurture teachers. In Beijing, the Da Fang Guang Public Welfare Website was set up to promote the teachings of traditional morals and ethics. Then arrangements were made for students to tour Hong Kong, Australia, Singapore, Malaysia, Taiwan, and the United States to lecture on Guidelines for Being a Good Person. The purpose was to help more people understand without doubt that learning and practicing the teachings of traditional morals and ethics will bring well-being, happiness, and stability to this chaotic society and uncertain world.

In 2005, The Lujiang Centre of Cultural Education was established in the hometown of Master Chin Kung, Tangchi Town, Lujiang County, Anhui Province, China. The ancient oriental system of classical teaching was applied as an experiment. Because a teacher should educate himself first, the requirement of the center was that every teacher was to fulfill the cultivation of Guidelines for Being a Good Person. Within only two months, all the teachers at the centre had met the criteria of the 113 points in Guidelines for Being a Good Person. They then went to the countryside to extensively teach and encourage the villagers—young and old, men and women, regardless of occupation—to learn together.

After just three months, the results were obvious. There were no more confrontations, no quarrels between husbands and wives. Mothers and daughters-in-law got along harmoniously. Disagreements were resolved. While previously there were many disputes between neighbors over trivial matters, now there were none. The residents co-existed courteously and modestly. Children knew how to be dutiful and were respectful to their parents. The character of the local residents improved greatly. Social behavior was likewise improved. While previously there were many thefts in the shops, after just two months of teachings, a taxi driver returned the money he found in his taxi. This is the harvest of teaching.

This six-month teaching experience at Tangchi Town firmly strengthened everyone’s confidence in reconciling conflicts and promoting social stability and world peace. Indeed “People can be taught to be better,” “All people are innately good,” and “Every being has Buddha nature.” Originally, every person was a good person. Every person’s innate nature is good.

If everyone was good, then why are people different now? It is because nobody taught them right from wrong. As a Chinese idiom says, “One who mixes with vermilion will turn red; one who touches a black ink stick will be stained black.” That is the reason. As long as there is proper teaching—the teaching that follows the innate virtues—every person will love to learn. Nobody wants to be a wicked person. Every person wants to be good. This is the indisputable evidence that was witnessed in the six months in Tangchi.

After Guidelines for Being a Good Person had been propagated in Hainan Province for several years; in 2006, Haikou Prison conducted an experiment by holding traditional culture classes at two jails. The content of their teaching mainly focused on the traditional classic Guidelines for Being a Good Person together with Filial Piety Classic, Analects, and Chinese Code of Success: Zhuzi’s Maxims on the Family.

The general rules in Chinese tradition, such as being affectionately dutiful to parents, kindheartedness, a sense of honor, and integrity, were used to educate the prisoners. The guards perceived the obvious changes after the prisoners attended the classes. The prisoner’s negative emotions and passive attitudes towards life were lessened. Because of the exceptional results, the Justice Department of Hainan Province implemented full-scale teachings on traditional Chinese culture throughout the province’s jails. Guidelines for Being a Good Person was applied as the core of this education, with an emphasis on filial piety.

Mr. Li Musong, the president of Phoenix Contact in Nanking not only personally visited The Lujiang Centre of Cultural Education, but also encouraged his staff to learn at Lujiang and applied Guidelines for Being a Good Person as his company’s management system. It increased the feeling of solidarity throughout the company. The employees became more willing to help around the workplace and were more considerate.

In Guangdong, a large career exhibition was held in Dongwan City. One media company advertised for the position of General Manager and offered an annual salary of RMB$180,000. On their recruiting poster, the first requirement for the candidates was “to memorize Guidelines for Being a Good Person.”

After studying at The Lujiang Centre of Cultural Education, the teachers went back to their own schools to promote Guidelines for Being a Good Person and were amazed by the results. In China, increasing numbers of kindergarten and elementary school teachers help students to learn Guidelines for Being a Good Person. Some schools, such as Dacheng School of Confucius College at Guilin City, and Peizhi School and Peixin Elementary School at Dadong district in Northeast China, have even promoted the teachings throughout the school.

Some dedicated Chinese young people and teachers from Singapore, Malaysia, Hong Kong, and Taiwan went to Lujiang to learn. Currently in Taiwan, several places are holding Guidelines for Being a Good Person Seminars. There are even some mayors and county magistrates who are willing to promote the ethics and moral teaching, especially Guidelines for Being a Good Person, to the entire city and county.

In Malaysia, people have taken an even more active role in promoting learning by inviting the teachers from The Lujiang Centre of Cultural Education to set up many Guidelines for Being A Good Person Seminars. In 2008, more than 1700 Chinese headmasters and teachers attended a “Guidelines for Being A Good Person Traditional Culture Learning Seminar” at which Master Chin Kung gave an inspiring keynote address to the participants. The Education Minister of Malaysia, Mr. Datuk Hishammuddin Hussein also attended the meeting and spoke highly of the traditional culture teachings.

Tan Sri Kim Yew Lee [a well-known Malaysian businessman] expressed his enthusiasm to continue to fully support the propagation of the teaching of traditional Chinese culture in Malaysia. He said that Malaysia supported this education and hoped that the staff from The Lujiang Centre of Cultural Education could move to Malaysia. Due to the extraordinary achievements of promoting Guidelines for Being A Good Person traditional moral education, students became more devoted to parents and were more courteous. This is why virtually all Malaysian’s Chinese schools now strongly encourage the teachings of Guidelines for Being a Good Person.

Due to the excellent results from the teaching of Guidelines for Being a Good Person, increasing numbers of people now learn, practice, and promote this traditional culture in schools, corporations, and even in cities and many places around the country. When teaching only one book can bring so much benefit, just imagine how much the teaching of all three books could accomplish!

With the support of the local government and the assistance of kind-hearted people, Qingyun Academy will be established at Qingyun County, Shandong Province, China. The goals of this academy are to contribute to the development of ethical and moral teachings, to foster harmony in society, to take up the responsibility of propagating traditional Chinese culture, to nurture teachers of morality, to respond to the call of county government for “the development of harmony in society,” and to actively accord with the county government in its goal to build Qingyun County into a Model Township of Harmony.

With Guidelines for Being a Good Person, Accounts of Request and Response­, and the Ten Virtuous Deeds Sutra as the fundamentals for teaching and the guidelines for practice, as well as the support of the public and the endeavors of the faculty members to enthusiastically implement these books, we believe this academy will yield even more positive influence than The Lujiang Centre of Cultural Education.

Hopefully everyone will encourage one another, exert themselves in learning, and put into practice and promote the saints’ and sages’ teachings of ethics and morality, especially Guidelines for Being a Good Person, Accounts of Request and Response, and the Ten Virtuous Deeds Sutra­. If everyone practices the teachings in these three books, then the vision of world peace can be achieved.